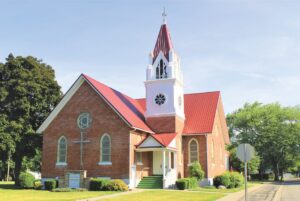 The Pigeon First United Methodist Church building stands on the corner of East Michigan Avenue and Frank Street, in Pigeon. It was originally constructed in Nov. 1899.

PIGEON – On the corner of East Michigan Avenue and Frank Street in Pigeon, just east of the downtown area, sits the Pigeon First United Methodist Church.

The beautiful red-bricked structure with accompanying large white steeple is an attractive sight to see. So nice, in fact, that it’s hard to believe the church has been around so long.

While the building itself dates back to 1899, the church has an even longer history than that – going all the way back to 1871.

After navigating its way through the challenges of COVID-19, the church decided to celebrate its 150th anniversary this month.

The milestone will be observed beginning at 9:30 a.m. this Sunday, July 10 with gathering music, followed by the church service starting at 10 a.m. Bishop of the Michigan Area of the United Methodist Church David Bard will be delivering the sermon.

After the service, there will be another 30 minutes of worship music, then a catered meal. 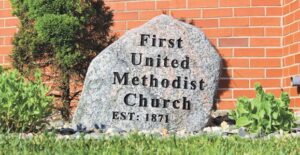 The church itself dates back to Nov. 1871. (Photos by Seth Stapleton)

She was baptized in the church and has been attending her entire life. In fact, most of her family has as well, dating back to her great grandparents. Her uncle even helped build the current church.

“We’ve been here a long time,” Sturm said. “We started out in the Old Colony, and we’ve hung in there forever.”

“Hopefully we’ll keep going and be a mainstay in the community and continue to serve people and all that good stuff,” Sturm added.

Similar to Sturm, longtime member Brent Woodward has been attending the church nearly his entire life. Woodward started going when he was just five years old, in 1949.

He said his parents had lived in Bad Axe and attended the Presbyterian church, before his father moved the family to Pigeon after a job transfer.

“There was not a Presbyterian church, so we went here, and I’ve been here ever since,” Woodward said.

Woodward recalls when he first began attending, only the front red brick portion of the church was there, with the parsonage next door in what is now an open grass area.

“It’s quite a milestone,” Woodward said of the church celebrating 150 years of service.

The congregation traces its history to the settlers of the German “Ora et Labora” colony that had been located on the sand ridge near Bay Port. When the colony disbanded around 1867, many of its residents remained in the area and joined other German families, settling on former colony property and adjoining land.

The people of Methodist heritage strongly felt the need for religious services and pastoral care provided by the church. They began to meet members’ homes and were ministered to at regular intervals by clergy of the Saginaw District of the Central German Conference of the Methodist Episcopal Church.

On Nov. 18, 1871, the Ebenezer Mission was organized at Caseville with 23 members, 11 probationary members, six teachers and 30 students enrolled in Sunday School. A combination church-parsonage was constructed there and put into use, but little more is known of this structure or its service.

When the town of Pigeon developed as a result of the crossing of the Pontiac, Oxford and Northern Railroad by the Saginaw, Tuscola and Huron Railroad one mile south of Berne, the church decided to take advantage of that growth and move to Pigeon. There, a new brick edifice, revolutionary in design and construction at the time, was built on the corner of East Michigan Avenue and Frank Street, where the current church resides.

An adjoining brick parsonage was also constructed, with both dedicated under the leadership of the Rev. Henry Bank, in Nov. 1899.