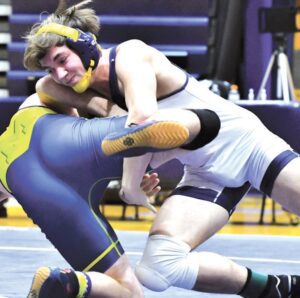 Charlie Hollingsworth led the way for the Hatchets, taking third at 175 pounds.

After receiving a bye in the first round, Hollingsworth pinned a pair of Oxford wrestlers, Colton Gilbert (Round 2) and Nathan Greer (quarterfinal).

He suffered a loss in the semifinal, but bounced back to pin Clio’s Anthony Vantino in the third place match.

At 106, Caiden Geiger was 2-2 on the day, with two decisions, including a sudden death victory over John Glenn’s Colton McLeod in the quarterfinal.

Both of his wins came via pin, including an exciting comeback over Saginaw Valley Lutheran’s Samuel Plamodon in the quarterfinal.

Bad Axe’s Collin Bingham attempts to get out of a move from Caiden Borowski from Memphis. At the Wayne Brady Classic, Bingham took fourth at 120 pounds.

He recorded three pins, including a victory over Manchester’s Dylan Guass in the fifth-place match.

Jolie Brown (132) was eighth, including a pin over Caro’s Trace Slezak.

For Ubly, Christopher Arlitt was fifth at 126, posting a 3-1 record.

He had a pair of pins and defeated Oxford’s Connor Stokes with a 17-5 major decision.

He secured seventh with a pin of Stoney Creek’s Dominic Hann.