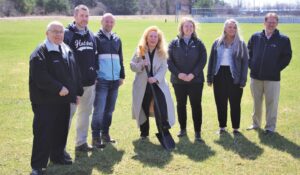 Bad Axe City Council members, including mayor Kathleen Particka (with shovel) and representatives from both the Spicer Group and Great Lakes Recreation, broke ground on the city’s new splash pad last week. The pad is scheduled to be open to the public by the end of June. (Photo by Seth Stapleton)

BAD AXE – The temperature may have been hovering just over 40 degrees, but officials from the City of Bad Axe were ready for people to splash around in the water. Or at least get the process started to do so.

After several years of work into the effort, the city finally broke ground on its planned splash pad, April 20, at a ceremonial groundbreaking event. The future pad will be located south of the Bad Axe City Park, off South Hanselman Street, just south of the city shed and north of the in-line skating rink.

“We’ve been wanting this to happen for many, many years,” said Bad Axe City Mayor Kathleen Particka.

Particka is in her second term as the city’s mayor. Prior to that, she served 12 years on city council. She said she has been talking about the project for quite a few years.

After a park and recreation plan questionnaire sent out to residents in 2016 showed a desire by the community to have a splash pad, it was a motive of the city to try to secure grants to go towards the effort.

Particka said the grant process was quite arduous.

“Anyone that’s ever done any grant work knows that even perfect grants don’t always get approved – but finally, they became approved,” she said.

Particka credited the rest of the Parks and Recreation Committee that she is on, with fellow council members Nicholas Rochefort and Clark McKimmy, for putting in the work necessary to get the project in motion.

“We got everything together and finally it’s coming into play,” she said.

According to city manager Rober Stiverson, construction for the splash pad is tentatively scheduled to begin on April 29, with the contractor expecting it to take a week to complete.

“It will take some time to re-establish the grass, which we hope is established by contract final completion date of June 17,” Stiverson said.

In 2018, the city received a MDNR Land and Water Conservation Fund Grant, which will pay 50% of eligible expenses for the project. The grant will expire June 30 of this year.

Spicer Group out of Saginaw completed the site layout for the project, including bidding and contract documentation, and will provide construction staking and construction management duties.

The company Great Lakes Recreation out of Holland will provide the actual construction of the splash pad.

Once completed, Stiverson said there will be an activator power post for people to utilize the park, which will have a button that allows the water to turn on and cycle through the features of the pad. This will be located straight off the end of the sidewalk leading up to the splash pad.

“It feels amazing,” Particka said following the ceremony. “And I think every day on my lunch hour, I’m going to walk over here once they start and see how it’s coming along. I think it’s going to be great for everybody.”