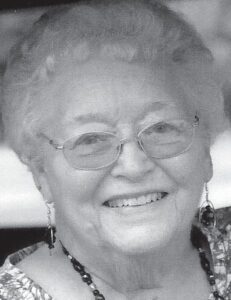 Doris was the daughter of Paul and

Gettel. Doris was born on March 4, 1928 in Kilmanagh and graduated from Sebewaing High School. She began her career in banking and retired after 30 years from the United States Postal Service. She married Clifford Bates, Jr. on April 17, 1949, he preceded her in death on November 21, 2006.

Doris is a long time member of Trinity United Methodist Church and served as a past Sunday School Teacher as well as the long time Memorials Treasurer. Doris was one of the charter members of the VFW Post #4115 Auxiliary that began on July 10, 1946. She served as the first treasurer, served through all offices, returning to treasurer, which she held until recently.

The family received visitors at Trinity United Methodist Church on Monday, October 25, 2021 from 9-11 a.m. with the service at 11 a.m.

Burial was in Memorial Park Cemetery in Sebewaing.

In lieu of flowers, those wishing to support a memorial should consider Trinity United Methodist Church, Sebewaing Ambulance, VFW Post #4115 Auxiliary or the Sebewaing Historical Society.