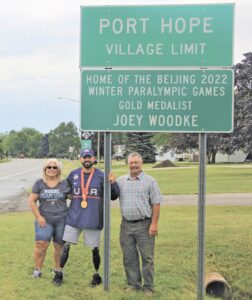 Joey Woodke, center, stands with parents Cindy Phillips and Jeff Woodke, in front of the road sign made to honor Woodke for his gold medal in the 2022 Winter Paralympic Games in Beijing. (Photo by Seth Stapleton)

PORT HOPE – Just hours prior to the start of Port Hope’s popular 4th of July Festival, an exciting event was already taking place in the village.

At a morning gathering Friday, July 1, the village officially dedicated a roadway sign at the M-25/Kinde Road entrance into town, to Port Hope native Joey Woodke. In March, Woodke helped lead Team USA to the gold medal at the 2022 Winter Paralympic Games.

Under the Port Hope Village Limit sign is now another that states: “Home of the Beijing 2022 Winter Paralympic Games Gold Medalist Joey Woodke”.

“I’m kind of a private person, so I don’t like all the attention all the time,” said Woodke afterward. “But it’s awesome to see the town come together and support me. I never really thought I’d have my name on a sign outside of town.”

Woodke also probably never thought he’d be an Olympic champion. The road it took to arrive there was quite an unpredictable one.

Woodke was raised in Port Hope on the family farm four miles outside of town, graduating from Port Hope High School in 2007.

“Growing up on the farm – at the time it was always working and everything – but now looking back on it, I really enjoyed my childhood,” he said. “Amazing family, a lot of good friends. Port Hope is small, but you know everybody, everybody cares about each other – it’s just full of good people.”

After graduation, Woodke took that discipline he learned working long hours on the farm and joined the United States Marine Corps as a combat engineer.

At age 19, he served his first tour of duty in Afghanistan. He then returned home, where two weeks after turning 21, he was redeployed again to Afghanistan.

During that tour, he was wounded after stepping on an improvised explosive device, losing both of his legs. He spent nearly a year-and-a-half in the hospital rehabbing, before moving back home for two years, going to college and working on the farm.

Woodke then moved to Tennessee, about eight years ago, which is where he started playing sled hockey. Two Marine buddies that were also double amputees introduced the sport to him.

“So, I moved down there, and we started playing,” Woodke said. “First, it was just like hanging out with the buddies, having fun. But as we got better, we started getting noticed by the U.S. Team.”

After spending one year on the U.S. Development Team, he made the national team about four years ago.

That experience led Woodke to his first gold medal, at the 2021 World Para Ice Hockey Championship in the Czech Republic. His next gold came in Beijing.

“It was a lot. Going to China during the pandemic was very interesting,” he said of the experience.

Because of the pandemic, Woodke said competitors were kept isolated during the competition, which was difficult.

“It was fun and the games were obviously on a different level – everybody’s there to win – but I kind of feel like, I wish my family could have been there,” he said.

Woodke did say it helped that everyone on the team were so close knit.

“I was just playing hockey with my buddies and all of a sudden, here we are with a gold medal,” he said.

Added Woodke, with a laugh: “People always ask me about the gold medal and I’m like, ‘Yeah, I’m just playing with my friends and I guess we’re pretty good.’”

As he previously mentioned, Woodke is the type of person that tends to shy away from talking about his own accomplishments. However, one thing he did enjoy talking about were the relief efforts taking place in the Ukraine.

Woodke recently returned from the country on a mission with the Airial Recovery Group. The nonprofit group has facilitated the rescue of thousands of orphaned children in the country.

Woodke said he was speaking with a member of the group and it was mentioned that because of the many amputees in the country as a result of the war, the Mayor of Lviv, Andriy Ivanovych Sadovyi, would be putting on an event to help raise money to build a hospital to care for them. And Airial Recovery Group would be helping out.

“He and I were talking about it, and I was like, ‘Man, that would be something I’d be interested in,’” Woodke said. “I remember being in the hospital, just wounded, not knowing if I’d ever be able to walk again, and then a double amputee walked in, and I was like, ‘Oh OK, I’m going to be good.’”

While in Ukraine, Woodke helped out where he could, met a lot of good people, and even attended a fundraising conference where he wound up being a speaker in front of the likes of Sadovyi, and various ambassadors and medical professionals.

“It was a pretty big thing. I was very nervous,” he said.

“The people there are just amazing – the strength that they have. It was really an eye-opening experience just to hear their stories and what’s really happening over there. I’m really glad I got to go.”

When the Port Hope Chamber of Commerce talked about honoring Woodke with the sign, Port Hope native and Huron County Road Commissioner Alan McTaggart proved to be the right man for the job. Because of his experience at the road commission, he had the expertise to make it happen, so he volunteered his efforts.

McTaggart still remembers the day he received word of Woodke’s injuries while at war.

“It was just devastating,” he recalls.

But during the sign dedication ceremony, he was all smiles.

“How great it is,” McTaggart said. “A hometown boy, that never even knew how to play hockey, to advance up and have a gold in Beijing. It’s just great.”