South Street in Bad Axe changed to a one-way

Temporary change in place for one year 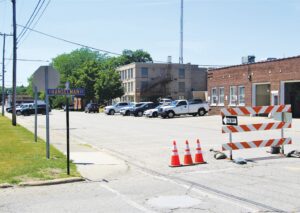 BAD AXE – Motorists in the City of Bad Axe will need to be aware of another change to a street in the city.

As a temporary traffic control change, council approval was not required for the project. However, Bad Axe City Council approved a resolution in favor of the move at its June 20 meeting, with a 4-to-1 vote.

According to City Manager Robert Stiverson, the changes came about to create additional parking spots and increase safety in the area. Stiverson cited the lack of parking spaces around the Huron County Building, people parking on private property during the Little League baseball/softball season at Rotary Park, as well as decreased visibility and safety with traffic in the area during the season.

“While baseball/softball season is short-lived, lasting less than three months, it is the time with the highest potential for accidents, injuries, and death,” said Stiverson, citing a couple accidents in years past.

Following discussions with council members, Bad Axe Little League officials, and city and county police, Stiverson said it was apparent changes needed to be made. He said the decision was expedited to be in place prior to the large baseball/ softball tournament at Rotary Park, which ran June 24-26.

By taking the street down to one lane, the city was able to add angled parking along the entire south side of the street, drastically increasing parking spaces.

“The decision to change the parking took South Street from 29 parking spaces to 67, an increase of 38 parking spaces for less than $1,500 in labor, equipment, and paint,” Stiverson said.

Factors that led to the westbound direction of the one-way include a shorter egress from the city’s parking lot that sits on the corner of South Street and South Port Crescent Street, safer traffic flow and ease of use vs. an eastbound direction, and the priority of how the baseball/ softball parking fills up.

The temporary traffic order will be in place until July 1 of next year. At that time, city council will revisit the issue and decide to make it permanent or not.

“The reason for the ‘temporary’ aspects is because something may sound good on paper, but doesn’t work in practice,” Stiverson said. “The temporary traffic order will be easier to rescind should the one-way not work.”

“Also, the temporary traffic order puts the burden on me as city manager, rather than on the council members, but will provide the city with more useful information for the city council to make a good decision on the merits of both street configurations. Should the project work out as hoped, this is expected to become a permanent change with city council approval.”

As a temporary measure, barricades and cones have been set up until officials are confident drivers are used to the changes. “Do Not Enter” and “One Way” signs will remain in place for the duration of the order.

Back in April, multiple intersections along Woodworth Street changed from four-way stops to two-way stops, in anticipation of a scheduled road project from the Michigan Department of Transportation in 2023 along East Huron Avenue.

Stiverson said the city initially received complaints of motorists speeding through the areas that used to have stop signs but haven’t had any comments on the changes in more than a month.